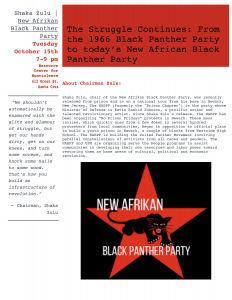 NOTE: For more information about this event, contact Barbara: balauren@ucsc.edu

Shaka Zulu, chair of the New African Black Panther Party, was recently released from prison and is on a national tour from his base in Newark, New Jersey. The NABPP (formerly the “Prison Chapter”)is the party whose Minister of Defense is Kevin Rashid Johnson, a prolific author and talented revolutionary artist. Since Shaka Zulu’s release, the NABPP has been organizing “No Prison Fridays” protests in Newark. These mass rallies, which quickly grew from a few dozen to several hundred protesters from local communities, began in opposition to official plans to build a youth prison in Newark, a couple of blocks from Westside High School. Tha NABPP is building the United Panther Movement involving parallel constellations of activists from all races and genders. The NABPP and UPM are organizing Serve the People programs to assist communities in developing their own resources and labor power toward restoring them as base areas of cultural, political and economic revolution.

“We shouldn’t automatically be enamored with the glitz and glamour of struggle, but get our hands dirty, get on our knees, and turn some screws, and knock some nails to some wood. That’s how you build an infrastructure of revolution.”
— Chairman, Shaka Zulu