Get in trouble- Good trouble, with Nonviolence! Check it out: interviews with Congressman John Lewis

Get in trouble- Good trouble, with Nonviolence! Check it out: interviews with Congressman John Lewis 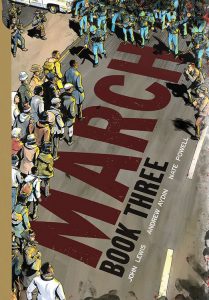 Get in Trouble- Good Trouble, with Nonviolence...!  Interviews with Rep. John Lewis

9/1/16: Congressman John Lewis interviewed by Stephen Colbert on Get in Trouble- Good Trouble, with Nonviolence...  https://www.youtube.com/watch?v=6ATwisIrtfg

The interviews touch on the  black lives matter movement; nonviolence, the struggle for a lifetime, creating the beloved community; voting as the most powerful nonviolent tool and more… 7 minutes., 12: http://www.cc.com/video-clips/cbcd9r/the-daily-show-with-trevor-noah-exclusive—john-lewis-extended-interview

The sit-in was just the beginning. As long as I have strength in my body, I’m going to do my part to do what I can… ….I got into good trouble, necessary trouble….disarm hate… When you see something that’s not fair, not just, when you see something that is not right, you have to do something. You have to move your feet and you have to be prepared to march…  the actions of Rosa Parks and words and leadership of Martin Luther King, Jr. inspired me… I couldn’t get a library card…
3 minutes, 48 seconds:  http://www.cc.com/video-clips/jy618r/the-daily-show-with-trevor-noah-john-lewis—getting-into-trouble-to-fight-injustice

5 minutes, 34 seconds:
“March” is a blueprint, a road map. It’s for now, it’s for the future. We’re saying to the young people of American and the world. …Black Lives matter movement….Martin Luther King Jr. would be proud to see….
Say no to racism, no to hate. We must disarm hate and create what he called the beloved community. and redeem the soul of America, and  in doing so maybe we can redeem the soul of the world and save this planet….
…You were a founder of SNCC. That was specifically designed around nonviolence.
We studied, we prepared ourselves. We studied the life and teaching of Gandhi. We studied Thoreau and civil disobedience. We studied  about what was happening in South Africa. We heard about Mandela… and others. We accepted the way of nonviolence as a way of  life, as  a way of living. You know, during the  60’s  I was  arrested 40 times, and since I was in Congress another 5 times. And I’ll probably be arrested for something else. But you have to be prepared. You may beat me, you may arrest me and throw me in jail…. I almost died on that bridge for the right to vote. I gave a little blood, but others gave their lives.
…The movement has changed.; the world changes. You were there. Part of what you were working for: voting rights act of 1965 coming to fruition.
Do you sometime think that Racism  is done., over?
No never,
It’s an ongoing struggle. Our struggle is not a struggle that lasts  a few days, a few months,  or a few years,  Its the struggle of a lifetime, maybe many lifetimes. But you must give it all. That’s why our book “March”is saying: We must continue to move our feet. You must continue to push and pull. Not just to make America better but to make the world a little better.
..America is great. And we can make America greater. But we still have problems. We have states, North Carolina, Texas… trying to make it harder, more difficult (to vote). That’s why the courts acted. They want to take us back.  …We’ve come too far, made too much progress to go back. …The vote is precious, it is almost sacred. It  is the most powerful nonviolent instrument or tool that we have in our democratic society. We should make it easy and simple for Everybody to participate.
http://www.cc.com/video-clips/vp9bf2/the-daily-show-with-trevor-noah-john-lewis—creating-a-blueprint-for-peaceful-protests-with-the–march–trilogy