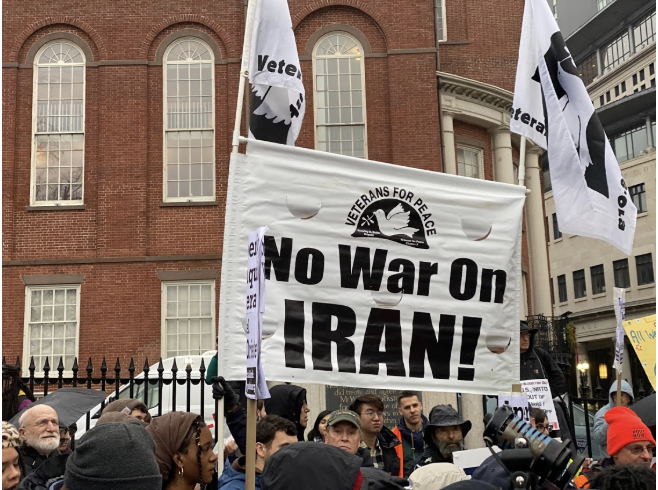 Protest alone is not enough. We ask people and elected officials to actively participate in a strong popular movement to pull back US military action in the Middle East. (See also resources/actions suggested by Veterans for Peace and the War Resisters League statement on Iran.)

The Resource Center for Nonviolence strongly objects to this statement by the elected Congressional representative on the Central Coast, Jimmy Panetta: ”When it comes to the use of military force by this administration, Congress will continue to be cautious and critical. Although the recent military strike against Iranian General Qasem Soleimani was relevant due to his malevolence in the Middle East, it was done without congressional consultation and without any clear strategy for the stability of the region and security of our nation.”

The statement betrays vision and values for peace. In its “caution” Congress has given up criticism. Republican and Democratic-led Congresses have funded military-led U.S. malevolence in the Middle East for decades. Congresses have refused to push back on Presidential abuse of military authority. Congressional approval of weapons sales to Saudi Arabia, Egypt, Israel, Turkey, support for military invasions and occupations of Iraq and Afghanistan, and unconditional support of Israeli military occupation of Palestinians and destruction of any two-state solution, all have created immense suffering and no “stability of the region and security of our nation.” The region is less stable, the U.S. is less secure for military-led policy in the Middle East.

Would Iranian assassination of Vice President Pence, Secretary of State Pompeo, former Secretary Bolton, or any of the other high US official be “relevant” by any international standard of relations between adversary nations? Would that not lead to war?

Even military adversaries have to consider the perspective of the opponent. Some high officials have voiced the goal of regime change—of overthrowing the Iranian government. The assassination will provoke military response, and likely escalations of overt war. For Representative Panetta to justify the assassination as “relevant” and fail to condemn the actions of the Trump administration is a betrayal of President Obama’s strategy of diplomatic engagement with Iran. A statement that is not full objection only supports the reckless military-driven strategy the US has used in the Middle East since 9/11 and before. US wars in Korea, Vietnam, Central America, Iraq, and Afghanistan have all taught the futility of war, have all created war crimes-scale suffering, have almost all led to dictatorships, instability, more human suffering. If we are to learn from the failures of the past, it is time for Democratic Party leaders to advocate nonviolent civil engagement with all adversaries, to methodically build reductions in violence and oppression.

It is time for Democratic Party voters to withdraw support from any Presidential and Congressional candidates who fail to criticize militarism. A large majority of Democrats in Congress voted with Republicans to pass $738 billion in military spending including funding to create a Space Force.

At this time of donating to candidates who might defeat Trump, we should donate at least as much to nonviolent action and education. Real hope is in mobilizing political power that defeats status quo militarism in both the Democratic and Republican Parties.

More than that, each of us can join a constituency for peace that builds a mass movement, with local nonviolent direct action campaigns pushing achievable goals, like:

—withdraw communities and elected representatives from complicity with military bases, corporations, and policies.

—push weapons manufacturers out of our communities

Our local campaigns can join a national movement that wins

—substantial cuts in the military budget

—substantial increased funding to eliminate poverty, at home and in conflict zones

—stops the influence of weapons manufacturers on US policy and budget.

—funds political education in the United States that identifies the destructive consequences of US militarist and racist policies and promotes nonviolence.

We can elect members of Congress who work to uphold the Constitutional mandate that only Congress can declare war, pushing back on decades of increasing tolerance for presidents who initiate military actions without Congressional approval.